Are you new to blogging, and do you want step-by-step guidance on how to publish and grow your blog? Learn more about our new Blogging for Beginners course and get 50% off through December 10th.

WordPress.com is excited to announce our newest offering: a course just for beginning bloggers where you’ll learn everything you need to know about blogging from the most trusted experts in the industry. We have helped millions of blogs get up and running, we know what works, and we want you to to know everything we know. This course provides all the fundamental skills and inspiration you need to get your blog started, an interactive community forum, and content updated annually. 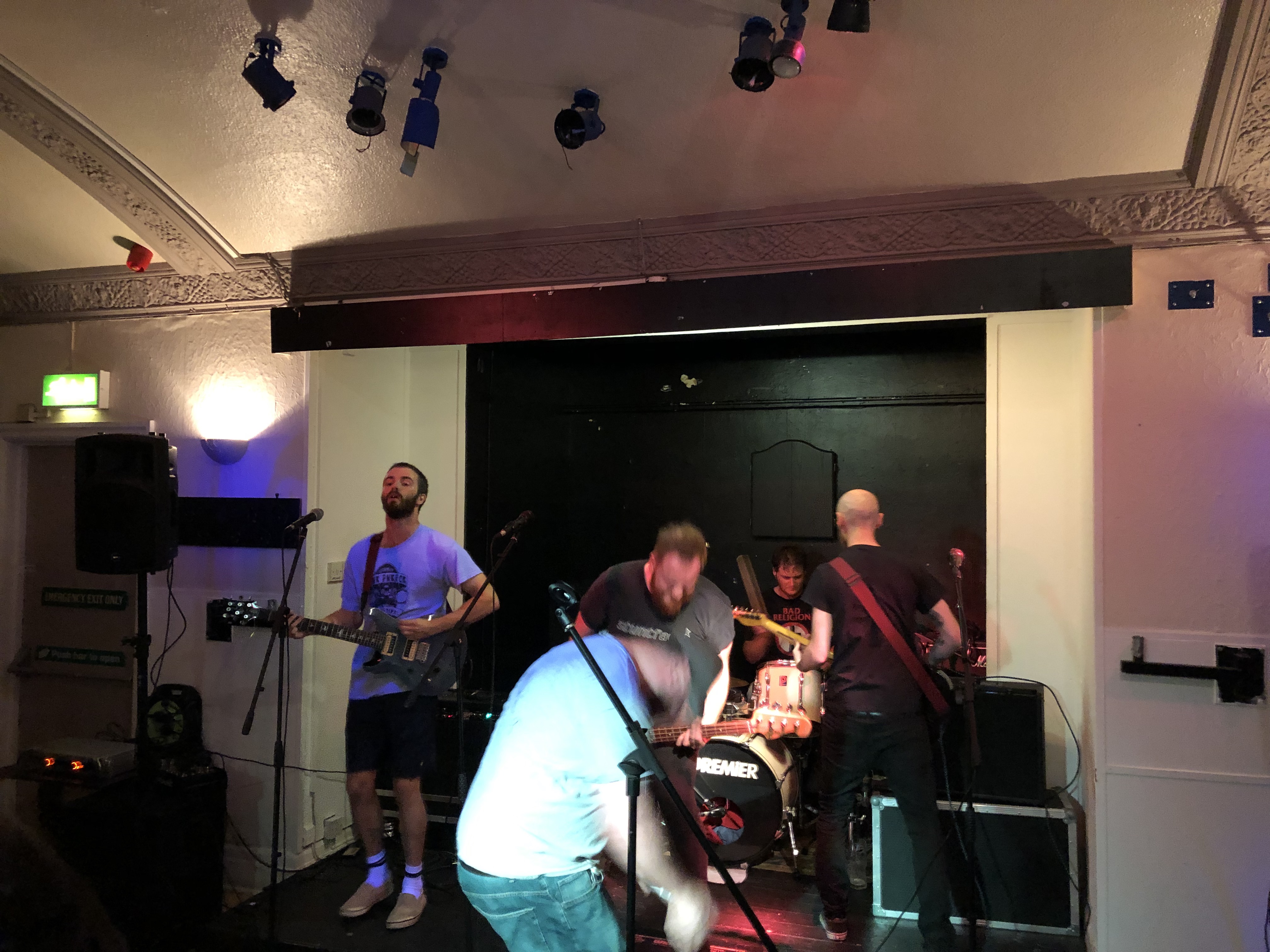 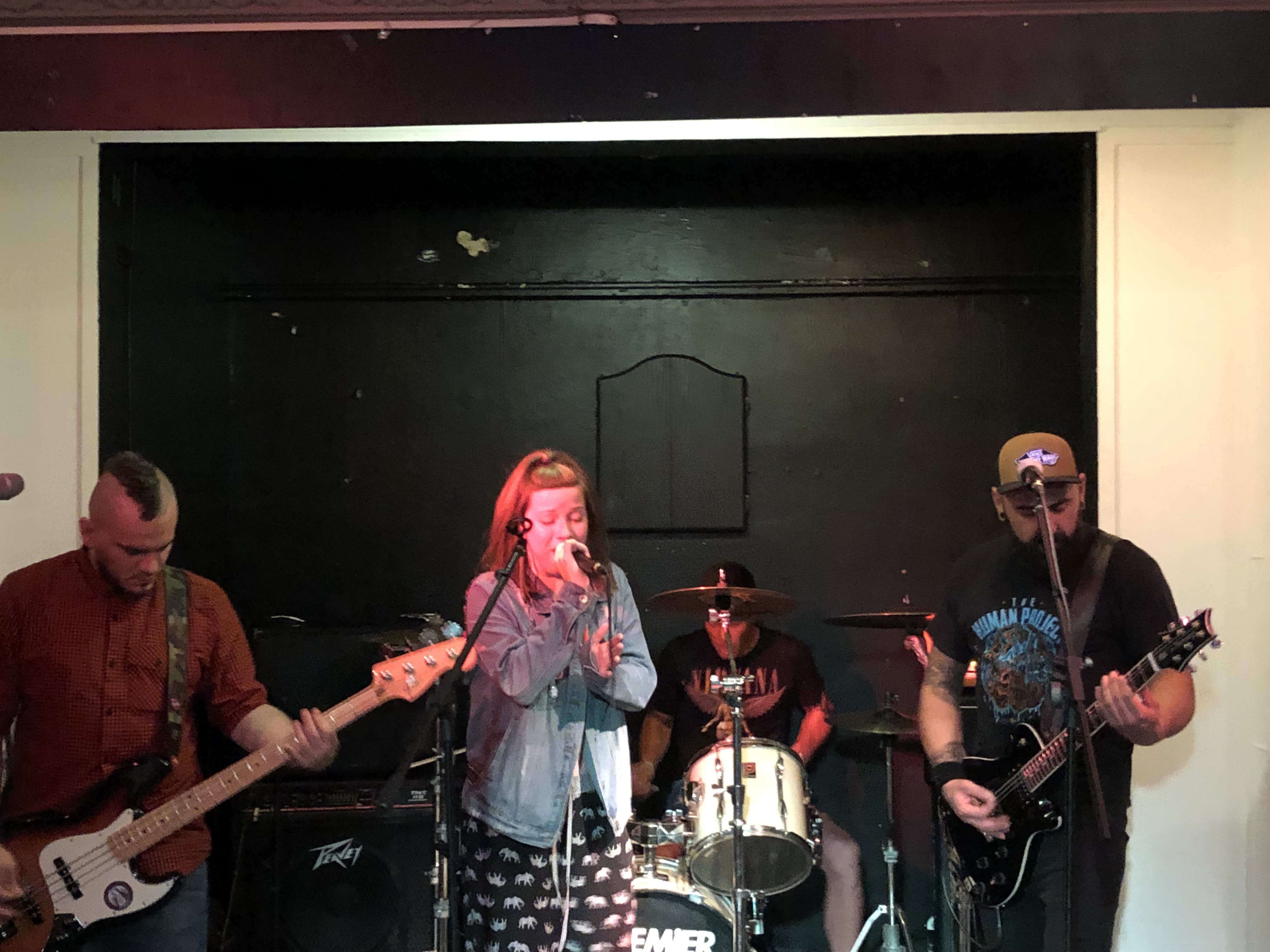 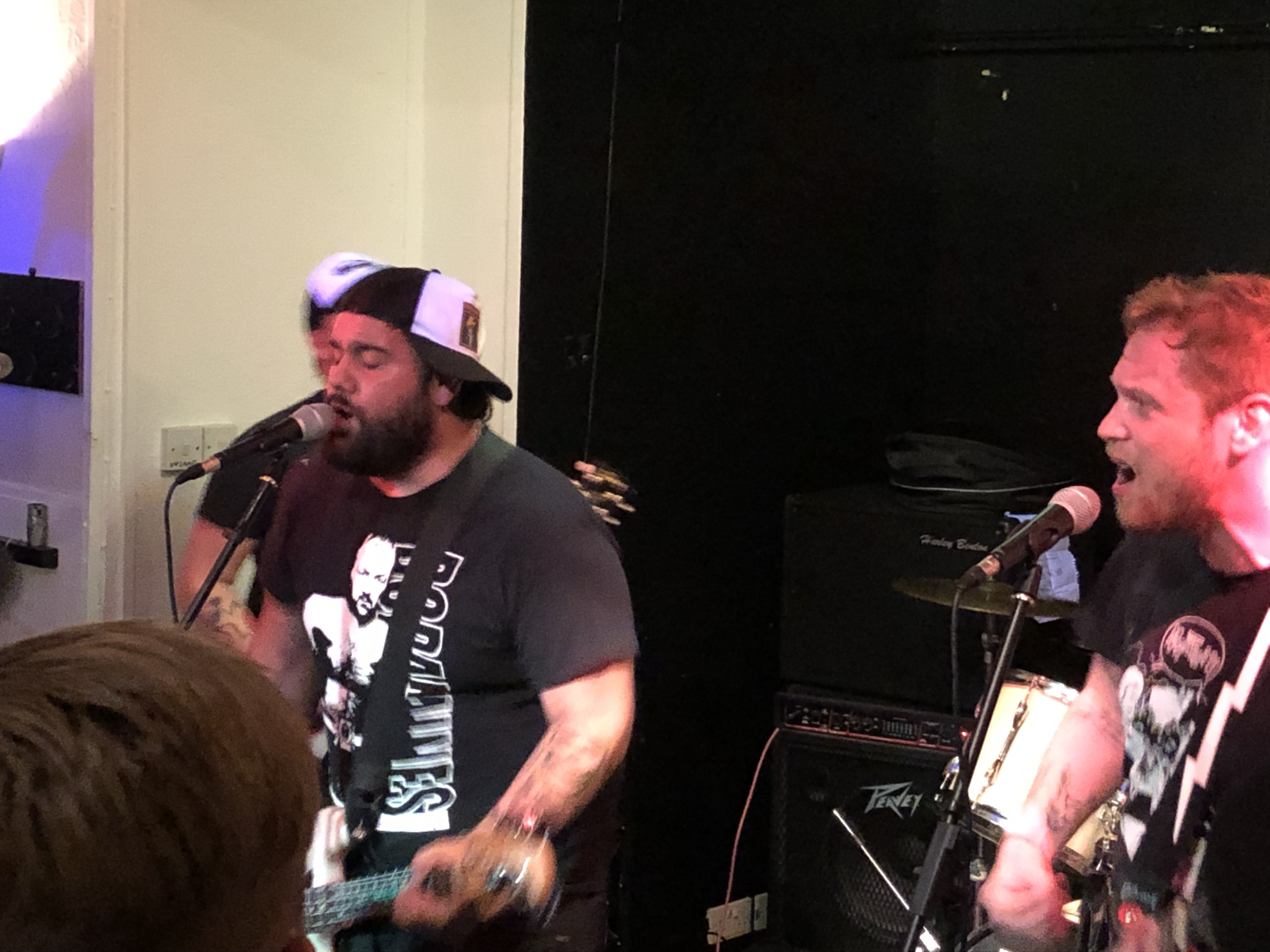 Another Saturday night in Stourbridge at the Mitre hosted by the wonderful Pete Tromans and his mighty Noise Merchant Collective. Across the country every week there are hundreds of gigs featuring 1,000’s of bands. Some of the gigs are like Pete’s, a real DIY labour of love for everyone involved. A lot of work is pumped into these events, planning, promoting and ensuring everything runs smoothly on the day, and it must seem, if you purely count numbers through the door, for very little return (I can’t even begin to contemplate how the books all balance – or don’t!). Pete’s got a great knack of pulling in bands from around the country, there’s always ‘new’ bands to check out and usually enough variety to keep even the picky punters happy. The crowd tonight is not big, around 20, but enough to generate a little atmosphere in the upstairs room at the Mitre (once regular host to the Black Country grebo rockers Neds Atomic Dustbin, Pop Will Eat Itself and the Wonderstuff). Boguns from Wrexham get us underway with a blistering opening set. Likewise, Nieviem from Lincoln play great edgy melodic punk and impress the room. I’d seen Shackleford earlier in the year at the Mitre and absolutely love them. Dedicating a couple of covers at the end of the set to Pete they blew any remaining cobwebs right out the place. I then had to do a runner to get the last train home (I can’t believe its 2019 and the last train on Saturday night was at 10.40!) so missed the Bitten but I had seen them before and they are great! I think we need to do all we can to support gigs like this. It’s great to get 4 bands (£5 in, so that’s £1.25 per band – quick math!) from around the country playing in a small upstairs room at a pub in the Black Country. But gigs like this will only continue if we support them- so spread the word, share on Facebook, invite your friends, come along (it’s a cheap night out), buy the merch if you can. At the moment there’s plenty more of these gigs coming up, follow the Noise Merchant Collective on Facebook to get line up and venue details: https://www.facebook.com/profile.php?id=1471367266236124&ref=br_rs 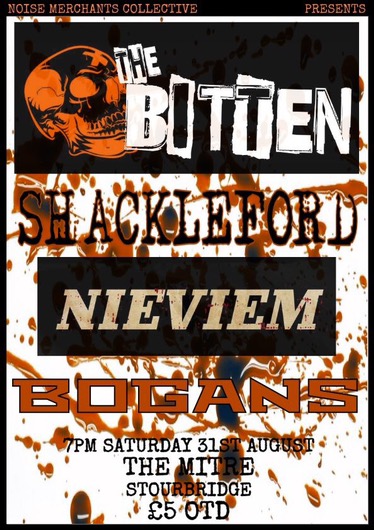 Another cracking line up at the Mitre in Stourbridge pulled together by the amazing Pete Tromans and his Noise Merchants Collective.  Let’s keep supporting so the gigs keep coming.

If I invite you to come sleep with me, we’ll do the deed like Adam and Eve.
We’ll make like rabbits and the earth will move, Like Madonna and Sean we’ll be in the groove.
I’ll let you do anything you want to do, if I send that invitation out to you.
But if I don’t invite you to sleep with me, then its nots okay – it is absolutely not okay for you to think that it acceptable to lay a single finger on me, or to talk down to me, or to send me unsolicited messages or dick pics and to use your perceived power or position to try to manipulate and get what you want you worthless, bullying, deceitful, misogynistic apology of a man. You’re a piece of shit, you’re an embarrassment to your gender, your family and your friends. It is not okay, it is not okay at all!!!

So… I hope the message is crystal clear but if it’s not let me bend your ear.
If I say no that’s what it means – there is no room for manoeuvre in-between.
I can be provocative in the way I dress but that still means no is no it doesn’t mean yes!
So if I don’t invite you for afternoon tea, don’t assume that’s okay with me.

Here’s another great gig from Noise Merchants Collective. Scheduled for the 30th March at the Mitre in Stourbridge this time it’s free in as long as you bring 5 items to contribute to the Foodbank.  Line up almost complete and as it’s for a great cause it would be rude not to come out and support! 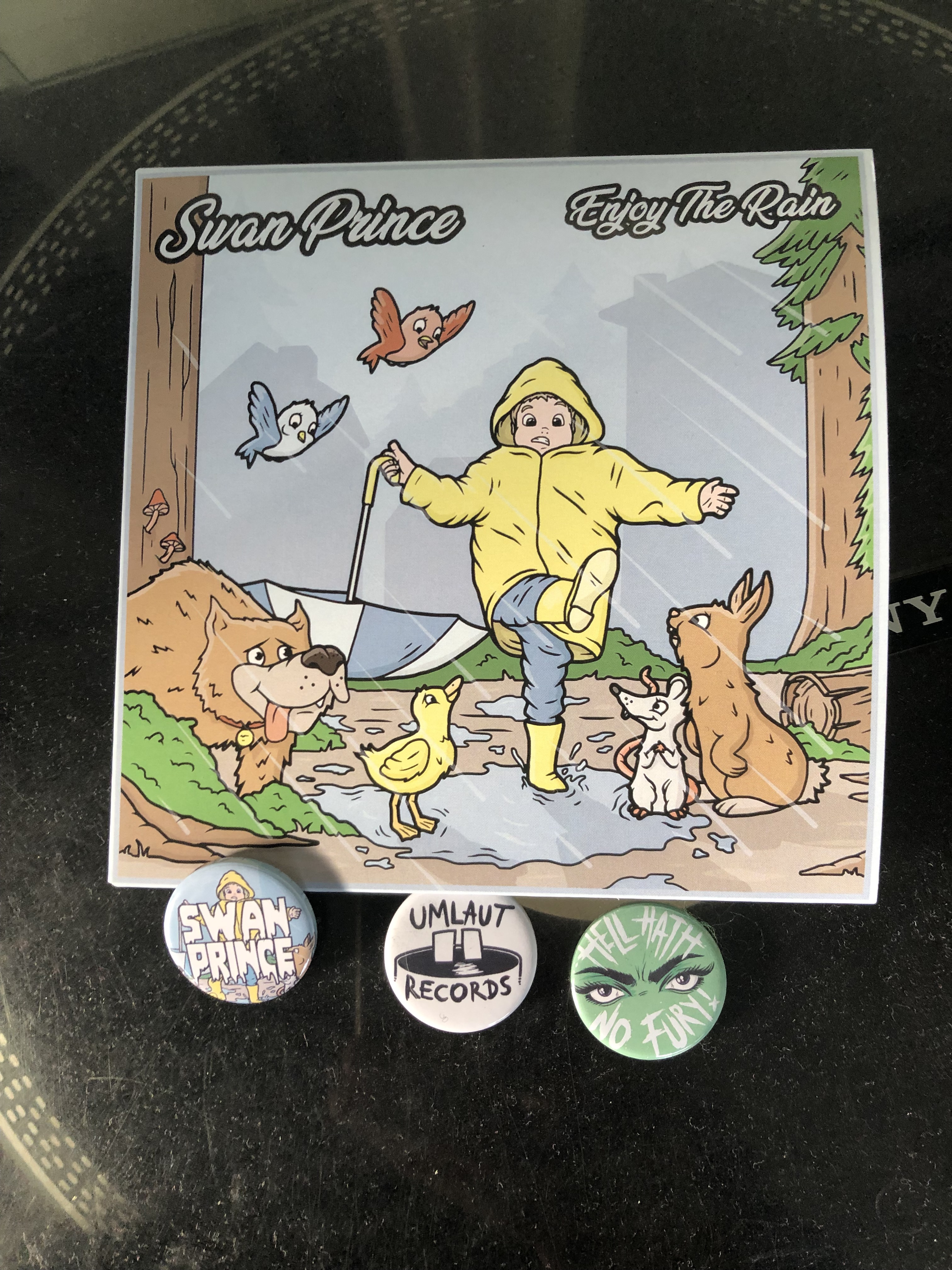 Just received this little bundle from Hell Hath No Fury Records which came as part of my order for the new Swan Prince e.p. Enjoy The Rain.

The e.p. is rather good and on heavy rotation at the moment. Strongly recommend you give it at listen or go out and purchase via Bandcamp, Spotify, iTunes etc

For more info on Swan Prince and to support the band and buy merch check them out on Facebook or the links below: 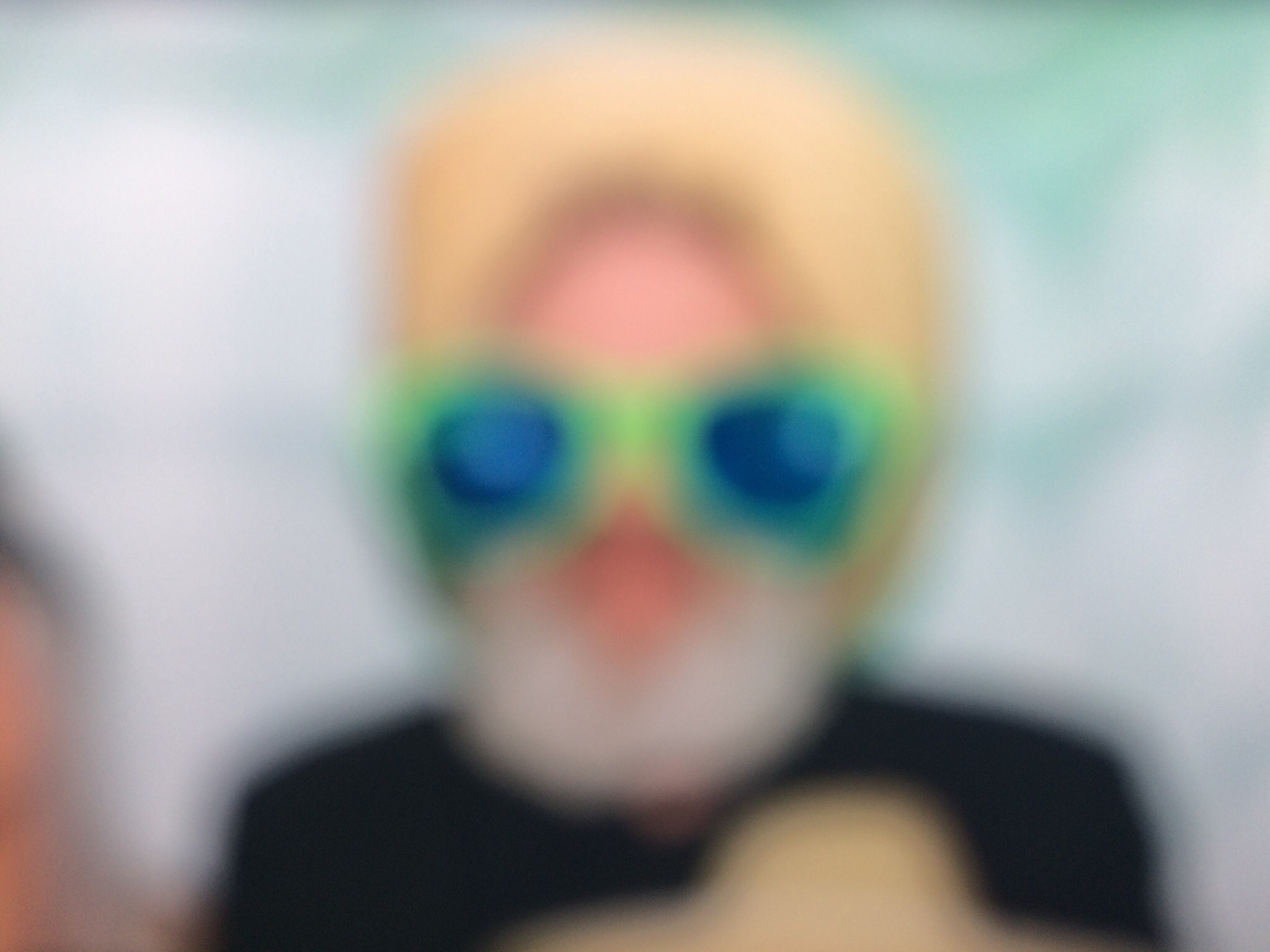 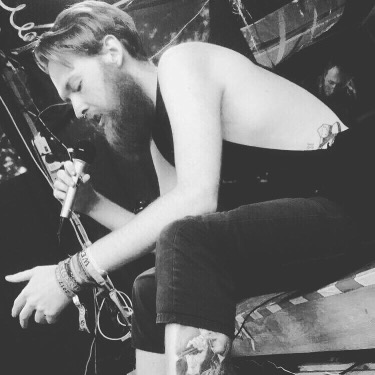 Most of this poem won’t mean anything to most folks but it features little snippets of my life as I went from about aged 13 – 20, living in a time when musical subcultures and tribes existed and music and hanging with my friends (and future wife) were the most important things in life. Everything mentioned is true and happened.  I Am The Egg Man refers to I Am The Walrus which was one of the songs played regularly on the jukebox at the pub where we used to hang.

I Am The Egg Man

Playing football with the rockers, patchouli oiled double denim strikers on Sunday afternoons.
No half time oranges but matches abandoned on a field of magic mushrooms.
The two tone zoot suits offered a feigned comfort while shrouding a hidden threat of violence.
Crombie nightmares when the shroud drops and my body hits the floor as the DM kissed my face in silence.

Shell Corner Mob scrawled on walls marking out territorial borders that only seemed to exist as the sun went down.
Hanging with the punk rockers and the rude boys, feeling edgy on the dark side of our town.
Glue bags over Rowley as the skins share their jail time stories while we stand rooted in awe and fear.
Getting chased by teddy boys, realising for the first time I was in a gang, just not theirs.

Street walking cheetahs, our hearts were full of nonsense our pockets full of lip balm
Every night was happy hour at Sam’s Balti House, £2.50 chicken Balti and a family naan!
We push the borders and discover that as well as ducks there are Psychobilly’s in the park
I think I’m Robert Smith, you can’t see this boy cry because of my sunglasses after dark.

Rum & black fuelled speedway discos – dancing with the trendys while TinTin is looking for a kiss
We’re the weirdos in the corner – moving like caged tigers, we couldn’t get closer than this.
Throwing alcohol at the testosterone – the dance floor clears as the factions clash and cut loose
I love us being the weirdos, the clothes and hair are out there! As long as you don’t mind all the abuse!

JBs on Fridays – Red Stripe and Sisters of Mercy – followed by the walk home serenaded by a dawn chorus.
We all knew how to Party In the Dark. Well they did! We just watched in awe as they played for us.
Drinking cocktails out of saucepans through straws, the best mixtape in the world, house parties & home brew,
Daytrips to the seaside. Night trips to the darkside, in grotty clubs watching some model army that was new

We are a disparate bunch
Thrown together by a mutual love of music, beer and lunch.
We’re a mod and a rocker, a skin and a rude boy,
A punk and a goth, a casual and a scooter boy.

We are the finest weirdos in the land
I am the egg man, she is the egg Mand. 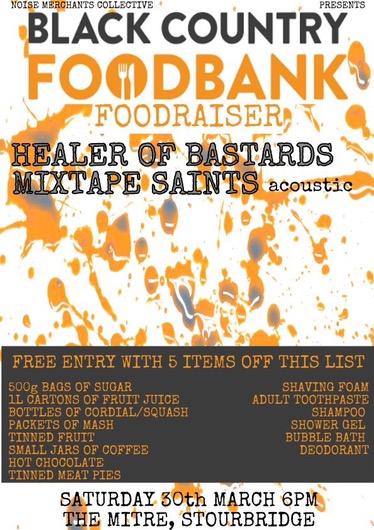 Here’s another great gig from Noise Merchants Collective. Scheduled for the 30th March at the Mitre in Stourbridge this time it’s free in as long as you bring 5 items to contribute to the Foodbank. Bound to be a great line up and as it’s for a great cause it would be rude not to come out and support!

This is a text widget. The Text Widget allows you to add text or HTML to your sidebar. You can use a text widget to display text, links, images, HTML, or a combination of these. Edit them in the Widget section of the Customizer.
Never Loved The Shovel
Blog at WordPress.com.